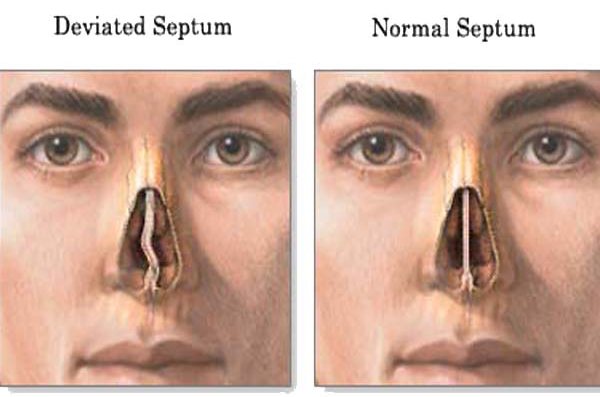 Three years ago, I noticed that I couldn’t breathe out of my left nostril.

This feels like the sort of thing I should have noticed right away, and yet it’s a detail that had somehow alluded me for years.

How do I know the issue hadn’t recently developed?

Because, after realising the issue, I visited an Ear, Nose, and Throat (ENT) specialist, and within moments of walking into his office, he asked me, “So, when did you break your nose?”

Then he nodded. “You did,” he said, taking a closer look at my nose. “It’s crooked. A nose isn’t supposed to look like that.”

But I couldn’t have broken my nose recently, as nothing had hit me in the face that recently. I could, however, recall multiple times of getting hit in the face as a teenager while playing soccer, rugby, and baseball.

Upon further inspection, I was diagnosed with a deviated septum. This is where the bone between your nostrils deviates from its natural position, restricting airflow in one (or both) of your nostrils. Plenty of people have a deviated septum (it can be genetic) and aren’t noticeably affected by them, but the doctor was quick to label my case as “severe.”

The good news is, fixing a deviated septum isn’t complicated. It’s a very low risk endeavour. The bad news is, it does require surgery. There is no other way to return your airways to their maximum capacity.

Feeling compelled to nip this issue in the bud, I elected to have this surgery in April of 2014, and I’m happy to report that I lived to tell the tale. Prior to the surgery though, I’d been curious about other people’s experiences. What was the surgery like? Was it difficult to recover? I found some blog posts and YouTube videos that discussed the process, but nothing comprehensive. That’s why I’m writing this article: to help people with a deviated septum get an idea of what to expect from the process.

Breathing is an important part of existing, so having restricted airflow through your nostrils can be problematic.

Most notably, a deviated septum can cause:

The mouth breathing in particular is a nasty side-effect, as it can cause a variety of dental problems and physically alter the structure of your face. (This could explain why I have a receding chin.)

Since all of these symptoms can stem from other sources though, the best way to self-diagnose is to block each nostril, one at a time, and breathe slowly. Do you notice that one nostril is much more difficult to breathe out of? If so, you probably have a deviated septum. In my case, I couldn’t breathe in or out of my left nostril at all. Yours might not be as severe though.

Although a deviated septum can be easy to self-diagnose, it’s always worthwhile to get a professional opinion. (You’ll have to get one anyway before opting for surgery.)

I saw two specialists about the issue — the second one, Dr. Jason Roth — is the one who eventually performed the surgery, and they both identified the problem in the same way:

It was a mildly uncomfortable process, but nothing too miserable. It was about as annoying as a dental check-up, but it was over in a matter of seconds. My eyes watered a little, and the taste of the anaesthetic hung around for a while, but there was no outright pain.

There are two common surgeries for the nose: the septoplasty and the rhinoplasty. To fix a deviated septum, the septoplasty is the surgery that will be of interest to you, as it’s the surgery that is conducted to straighten the nasal septum. A rhinoplasty, in contrast, is colloquially known as a “nose job,” and it’s a purely cosmetic surgery for redesigning the look of your nose.

If your deviated septum is severe, it can cause your nose to look crooked, which is why some people elect to get both surgeries at once. This does cost more overall, but costs less than getting both surgeries separately and means you only have to deal with a single recovery process. I decided not to get a rhinoplasty though, as I wasn’t too concerned about the look of my nose. I just wanted to breathe properly. Even so, it’s always worth knowing about the options that are available to you.

Compared to most surgeries, a septoplasty is fairly unremarkable. It’s low-risk, only lasts a couple of hours, and the recovery process isn’t particularly long or hard (in most cases).

Your surgeon will inform you of everything you need to know to prepare for your surgery, but in my experience, these were the most important points:

There’s not much to say about the surgery itself. I went to the hospital, put on a gown, lay in a bed, got wheeled into a surgery room, and fell asleep shortly after the anaesthetist asked me to count to ten. Two hours later, I woke up shivering and groggy, but after the nurses dumped some blankets on me, I soon came back to my senses and the recovery process had begun.

It’s impossible to predict how any individual person will recover ahead of time, as it depends on a variety of factors, such as severity of your septum deviation, the skill of your surgery, your age, and your pain tolerance. Overall though, I found the experience to be manageable. It wasn’t comfortable, for reasons I’ll explain a moment, but it didn’t feel worse than a standard flu.

These are my observations of what you can expect after the septoplasty:

Something you might want to do before getting surgery is track your current sleeping habits with a device like the Fitbit Flex 2. Alternatively, download an app like Sleep Cycle, which won’t provide data that’s as accurate, but can be useful in determining relative improvements in your sleep. This isn’t strictly necessary, but I think it’s interesting to see if, mathematically, the surgery has improved at least one aspect of your life.

In my case, for instance, my sleep quality varied between 50-78% in the days before surgery. After I recovered from surgery though, the average jumped to around 90%.

Practically, this meant I was:

It’s hard to quantify the exact impact that improved sleep provides, but no one would contest the point that improved sleep is always a good thing. It’s how we recover, reset, and heal, and the fact that I’ve seen a numerical boost in my ability to get some quality shut-eye has only left me more grateful that I was able to discover that I had a problem and then get it fixed.

Was It Worth It?

The short answer is, “Yes.”

After the surgeon remove the plastic splints from my nostrils, roughly a week after the surgery, I took in a big, deep breath, and felt a surprising amount of air travelling into my nose. I hadn’t breathed so clearly in as long as I could remember. Both of my nostrils were now pulling their weight.

My sleep improved, smells were more intense, and overall, I was satisfied with what the cost, time, and energy of the surgery and recovery process had gotten me.

Three years on though, there is a caveat:

I am no longer breathing as clearly through my left nostril as I was the moment the splints were taken out. I can’t pinpoint when it happened, but my left nostril has partially closed up again. This, I knew, was a possibility. I believe it has something to do with how the inside of the nostril heals, and I’m not sure it’s something that can be avoided. For some people, the benefit of the surgery will decrease over time.

However, that’s not to say the benefit will disappear.

I can still breathe through my left nostril, which is not something I could do at all before the surgery, so there was an improvement. My right nostril is doing most of the work though, so the benefit is no longer as pronounced.

In the end, I’m still glad I got the surgery. It was reasonably priced, straight-forward, and fairly easy to recover from. I’m not lusting over more surgeries, but I certainly don’t regret the time and money I’ve spent on this one.