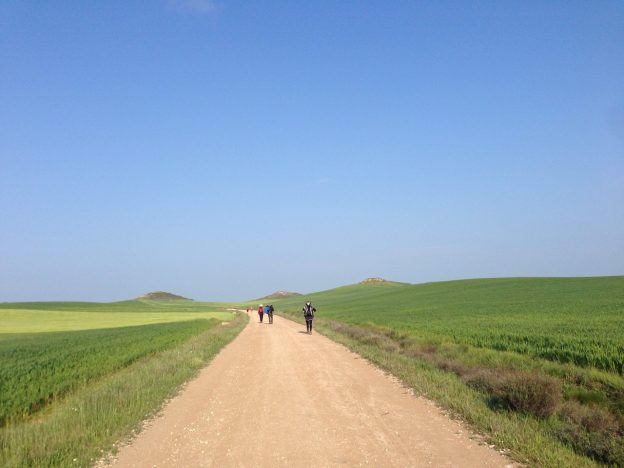 The two most common words you’ll hear on the Camino are “Buen Camino.”

The phrase means “Good Way” — “Buen” meaning good and “Camino” meaning way — and it’s a simple, cross-cultural way to wish your fellow pilgrims well on their walk. Even if you don’t share the same language with another pilgrim, you can still give them a friendly, verbal fist-bump.

Early on in the walk, countless pilgrims will use these words to greet you, and the appropriate response is to simply say them in return. Of course, you don’t have to wait for other pilgrims to initiate the greeting. It’s wonderfully fun to offer an enthusiastic “Buen Camino” in a stranger’s direction, as it’s like being part of an exclusive club, so don’t be afraid to enjoy yourself.

Something that’s not expected is to say “Buen Camino” whenever you’re passing by a pilgrim that you’ve already greeted, as you’ll likely be overtaking and be overtaken by the same pilgrims on a regular basis, and no one wants to end up in an endless loop of greetings. I did, however, find myself reusing the phrase as a farewell after chatting with a pilgrim that I’d already greeted.

It’s also worth noting that, along the trail, some locals might share a friendly “Buen Camino” in your direction. If you recognise them as locals — the lack of backpack and possibility of them walking in the opposite direction is usually a giveaway — then it doesn’t make sense to repeat the greeting back to them, as they aren’t walking the Camino. Instead, a friendly “Gracias” is the more appropriate response.