Last year, I walked 900km (560 miles) across Spain on a trail known as the Camino de Santiago. It’s a challenging enough adventure as it is, but what made things all the more difficult is that, three days into the walk, I felt an uncomfortable pinch in the back of my left heel.

At first, the pain wasn’t severe. It was just irritating — as if someone was lightly pinching the skin whenever I took a forward step — and I was mostly concerned about whether or not the pain would get worse.

Then it got worse.

Within a couple of days, I had in a full-on limp and was struggling to stumble along the trail at even a relaxed walking pace.

I turned to my friend Dr. Google and learned that I probably had achilles tendinitis, which is characterised by the following symptoms:

At this point, the sensible thing would have been to rest, recover, and re-attempt the walk at some point in the future. It’s not like I could walk over 800km with a condition that specifically affects walking.

Except that’s exactly what I did.

It’s not the most intelligent thing I’ve ever done, but it did give me insight into what treatments for achilles tendinitis actually make a difference, so if you’re struggling with some achilles tendon pain, I’d like to think that I can be of service.

Here’s what you should do:

It’s not difficult to self-diagnose achilles tendinitis, but that doesn’t mean it’s a good idea to do so. Before you descend too far down this rabbit hole, “positive” that your achilles tendon is having a bad day (or week or month), visit a professional and hear what they have to say. You might learn that you have an entirely different problem, or at least why you have tendinitis, which is important to know if you’re hoping to avoid further suffering in the future.

In my case, for instance, I visited a physical therapist in Burgos, Spain, and learned that my left ankle rolls inward, which the therapist suggested could contribute to tendinitis as the tendons were being placed under additional stress with each step that I took. He also gave me an ankle and calf massage, which helped relieve some of the short-term pain. Perhaps the biggest benefit though was psychological. Just having a professional confirm my diagnosis seemed to make some of the pain disappear.

If doing something causes pain, the best course of action is to stop doing that thing — or at least, do less of that thing.

This certainly applies to achilles tendinitis.

By abusing the tendons with whatever activity caused the pain in the first place, the pain will get worse and the healing process will take longer. Rest is the way to relieve the pain and prevent it from getting worse.

But of course, this is easier said than done. People have lives, after all, and life doesn’t come to a standstill just because your tendons are sore.

With this in mind, do the best you can do by taking frequent breaks. The more you rest, the faster the tendon will recover, but even just taking it easy after work will make a big difference over the course of a few weeks.

If you want relief from achilles tendinitis right now, buy some heel lifts.

Heel lifts are rubber wedges that are inserted into a shoe for the sake of raising the heel, and although I was skeptical of their usefulness at first, they proved to be the most effective and most immediate treatment for my pain.

By raising your heel, heel lifts reduce the amount of work your tendon has to do whenever you take a step, thereby reducing the pain you feel.

There are, however, a few things to keep in mind:

It’s also important to get heel lifts that are relatively firm — if they’re too squishy, they won’t keep the heel raised — and of an appropriate height. The exact firmness and height will depend on the person, so if you can afford it, purchase and test a few different options.

Even with these considerations though, don’t underestimate the power of heel lifts. Without them, I doubt I would have been able to continue my walk across Spain. They’re not perfect but they make a big difference.

4. Massage your calf with a lacrosse ball

If you have achilles tendinitis, you probably have tight calf muscles. One way to release this tightness is to get a massage, but since that’s not practical for most people, try giving yourself a massage with a lacrosse ball.

For the uninitiated, lacrosse balls are small, hard balls that can press deep into a muscle and release some of the tension contained within.

Here, for instance, is one way to massage your calf with a lacrosse ball:

If you’ve never done this before, it might look a silly, but it does provide a significant amount of (temporary) relief. Just don’t apply too much pressure at first, as lacrosse balls can be surprisingly painful against a tight muscle.

Using a lacrosse ball is a great way to temporarily loosen the muscle, but to ensure that your calf muscles remain loose, you need to stretch.

There are two stretches that will provide the most relief:

The first stretch involves pressing against a wall in a lunge stance, with your forward leg bent and your other leg straight.

The second stretch involves hanging your heels off a step (or any kind of platform) and then raising your heels until you’re standing on your toes. 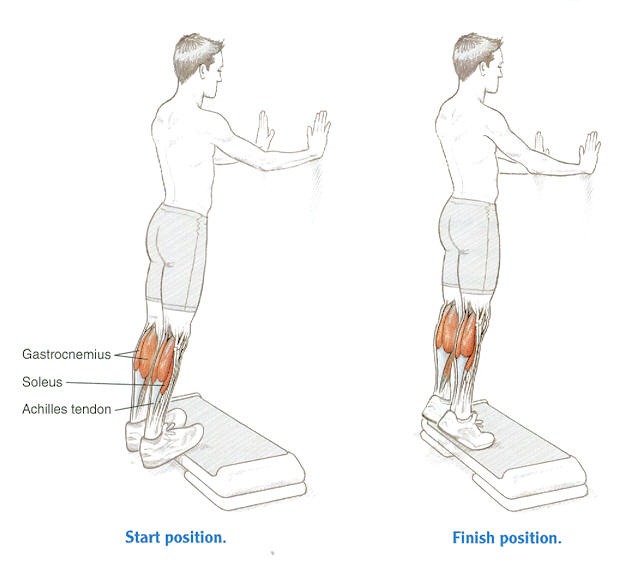 It’s important to note that stretches are not strength exercises. You don’t need to strain your way through them. You should feel a light tension in your calf muscles, but it’s more important that you repeat these stretches on a regular basis (multiple times a day) rather than aiming for sheer intensity.

If neither of these stretches provide relief, ask your physical therapist for alternative options or to check that you’re doing the stretches correctly.

Everyone is different, so a big part of finding relief is working to discover what works for you.

The problem with flat, hard surfaces is that they continually apply stress to your muscles and tendons in the exact same way. This, I found, worsened my pain as my tendon remained under constant pressure for hours a time.

What seemed to help though is walking on uneven surfaces, such as dirt and rocks and grass. My theory is that, because the ground is even, the stress to the muscles and the tendon is distributed, reducing the risk that any part of your lower-leg becomes overworked, as it might on a flatter, harder surface.

This, admittedly, is purely anecdotal, but with hundreds of kilometres of anecdote to back me up, it was enough to influence my own recovery.

7. Wrap your ankle in a compression bandage

Before I discovered the joy and wonder of heel lifts, I wore a compression bandage around my foot and ankle, which basically immobilises that entire area, and as a result, provides some relief.

You can see this bandage in this photo, around my left foot and ankle: 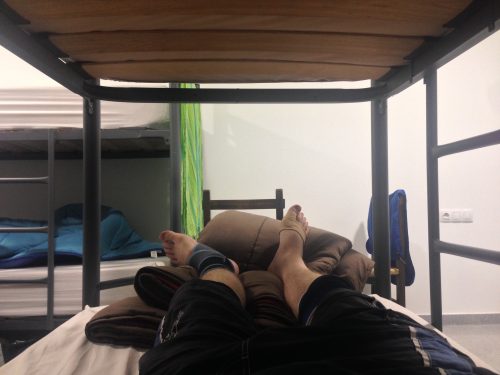 The side-effect of this sort of bandage is that it prevents you from walking with a natural gait, meaning it’s best not to use it over the long-term. If your tendon is really sore though, to the point that heel lifts don’t do anything for you, the bandage might be the sort of aggressive relief that you need.

Walking down a hill with achilles tendinitis sucks. This is because the angle slope applies additional pressure to the tendon. In contrast, walking up a hill should actually provide some relief from the tendon pain.

The obvious solution to this problem is to avoid walking down hills, but if that’s not possible — if you must walk down a particular hill, and the thought of it makes you cry in anticipation of the pain — then try walking backwards. You have to be careful not to stumble, of course, but by walking backwards down a hill you avoid applying the same pressure to the tendon.

This seems like a silly tip, and it won’t be relevant for a lot of people, but that one time it is relevant, it’s going to make a big difference.

The previously mentioned treatments should allow you to survive tendinitis without taking painkillers, but if you need to take painkillers, take ibuprofen.

“Why ibuprofen and not paracetamol?”

Because ibuprofen reduces inflammation, which is the mechanism that should provide you with relief from your tendinitis. Paracetamol won’t give you the relief that you’re looking for.

If you can though, try abstaining from painkillers. This isn’t because the painkillers are directly doing you any damage, but because if you mask the pain, you might continue to cause damage to the tendon without realising it. Going without painkillers might hurt more, but I found it useful to remain aware of what triggered the pain. That way, I could avoid those activities and prevent the tendinitis from getting worse from my lack of awareness.